skip to main | skip to sidebar

Rishikesh Krishnan IIT/IIMB on Reflections by IITians the Book,

Reflections by IITians
The current controversy about the salaries of IIT faculty has brought the IITs onto the headlines.
But Ram Krishnaswamy’s labour of love Reflections by IITians (contact Ram at reflectionsbyiitians@gmail.com) raises much larger questions about our elite technology institutions.
Every contribution to this volume is by an IITian, predominantly from IIT Madras, but with a sprinkling of contributions from the other IITs thrown in. Almost every IITian who has contributed to this book has struggled to live up to the expectations of himself (except for one, all the contributors are men), his family, and society at large. Some have chosen the domain of research and the creation of knowledge to prove themselves, others entrepreneurship, and a good number are driven by social concerns. Not surprisingly, what does come out is that the IITians are an exceedingly talented bunch and there are few human endeavours in which they would fail to make a mark.
Would they have done just as well without the IIT education? It’s difficult to say. But what is clear is that the IITs taught them to work hard and work long hours, made them confident of solving analytical challenges, and developed leadership capabilities in those who sought out opportunities beyond the realm of academics.
The IIT brand helped them gain entry into elite graduate and doctoral programs, and certification as professional engineers. What is equally clear is that most of them entered the IITs not because of any particular aptitude for engineering, but because they were good at Physics and Math and the IITs offered the best platform for their evolution, development, and career prospects.
One interesting takeaway from this book is on the differences between the IITs. In An Eye for Excellence, E.C. Subbarao applauds the science-based engineering curriculum of IIT Kanpur that created engineers with strong fundamental understanding of phenomena and excellent analytical capabilities. He implicitly admits the lack of “practical” engineering skill among IIT Kanpur engineers. Interestingly, according to the authors who studied at IIT Madras, in spite of the strong German influence and the rigorous workshop courses at IIT Madras, most IIT Madras engineers seem to have the same lack of practical engineering skills. It appears that the strong Indian cultural hierarchy that places the mind over the body dominates the Indian work ethic so strongly that there is little that the curriculum can do to overcome this. Of course, there are other interesting social forces that could be responsible for reinforcing this hierarchy, including the preponderance of Brahmins among IIT Madras faculty.

Posted by Rishikesha Krishnanat 2:28 AM
Posted by R.K at 2:50 AM No comments:

Among all the venture capitalists in the Silicon Valley as well as in the Southeast, graduates of IITs had the reputation of consistently being successful entrepreneurs
Prof. Jayant Baliga, IIT Madras Alumnus,
Professor, N.C. State University, Raleigh, USA; Director, Power Semiconductor Research Center -PSRC

I am satisfied that my Brand of Technology is also a Brand IIT that has benefited the common man of India.
R.Srikumar, IIT Madras Alumnus,
Director General of Police, Karnataka State

If you withstood the IIT Hermitage, you are fit for anywhere, any situation, any challenge in the world
B.K.Syngal, IIT Kharagpur Alumnus
Senior Principal, Dua Consulting Pvt. Ltd.

The Institute must wean itself from a totalitarian Engineering bent, and start expanding its horizons to include a greater assimilation of arts and sciences
Prof. Nagarajan, IIT Madras Alumnus
Professor of Chemical engineering, IIT Madras

I want to change what people do and believe in Hindu society, especially with regards to caste and gender discrimination.
Dr.Jaishree Gopal, IITM & IITD Alumna
Co Founder of Navya Shastra

In our times it was not the IIT’s which made us great. It was the toil and sweat of the likes of us which made the world realise our value and made the IIT’s great
Professor Harwant Singh Chhabra, IIT Madras Alumnus
Director of MBA & BBA programs, BLDEA’s A.S. Patil Institute of Management, Bijapur

“The competition is so tough, that at times it grinds you to bits but you infuse an ability to rise like a phoenix”
Rishi Dhingra, IIT Kanpur 2004 Alumnus

Posted by REFLECTIONS the BOOK at 7:53 PM 4 comments: 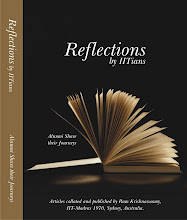 "Reflections by IITians" the book will be officially launched by Dr. Anil Kakodkar, Chairman Atomic Energy Commission and Chairman of the Board of Governors of IIT Bombay and a panel of IIT Directors, at the inaugural session of the PanIIT 2008 meet on 19th December 2008 at 11.30am"

This Book Reflects the Power of Internet and the Power of the IIT Network. IITians have taken to Yahoo groups, Google groups and Linked in like ducks to water. In fact there are 1742 yahoo groups belonging to IIITians world wide.

Alumni from five IITs have shared their journeys, creating a wonderful book that gives back to India, by donating the profits to Jeevodaya, a Hospice for terminally ill cancer patients located in Chennai, India

Buying a copy of Reflections

At this stage we are depending on the IIT Network to promote sales to other alumni, family, friends and IIT aspirants, by word of mouth and by forwarding this Link by email.

Buy With PayPal in India or Overseas

Please Send all enquiries to :
reflectionsbyiitians@gmail.com